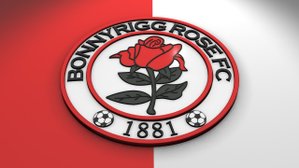 Having gone three games without a win, it was clear from the offset that the Rose were as determined as ever to put on a good display on Tuesday night.

After getting his first goal of the season at the weekend, Dean Brett continued to show just how much he has to offer. His pressure saw him win the ball high up the park before feeding Ross Gray, but his strike went just wide of the post.

Ross and brother Scott were heavily involved in the opening stages of the game. Scott took a good shot from distance that flew just wide of the post, while Ross latched on to a McGachie flick on from a goal kick to find himself bearing down on goal, but his shot was blocked well by the Strollers defender.

The visitors’ first chance of the game came through Mark McConnell, as the striker tried an audacious effort from outside the box, only to see it bounce off the top of the crossbar and out for a goal kick.

A sensational diagonal ball from Neil Martyniuk fell at the feet of Brett thanks to the wingback’s sublime touch as he drove into the box, but the onrushing ‘keeper Lewis Budinauckas did well to keep Strollers level.

Brett would be involved in an attacking sense again as he received a cut back from Scott Gray, who had danced into the box seemingly with ease. Budinauckas once again made the save from Brett’s touch and hit, with McGachie sniffing around on the follow up, but the Civil defence did well to clear.

The Strollers stopper was called into action again just moments later, getting down quickly to save a Dean Hoskins volley at the backpost.

Rose’s final chance of the half proved to be their best. A corner from Lee Currie caused chaos in the box, with the ball pinballing around with Strollers players attempting to clear and Bonnyrigg players attempting to pounce. McGachie had a great chance to do so as the ball broke to him in the centre of the box, but his finish was wayward as Civil breathed a sigh of relief.

The second half started with three Rose penalty shouts, the first coming after Scott Gray was clattered inside the box. Two handball claims followed, but the referee didn’t point to the spot and the hosts had to seek a different route to victory.

But before they could do that, it looked certain that they’d have to contend with a one goal deficit, but Strollers missed by far the best chance of the game. A cross-come-shot from David Churchill bounced off the inside of the post and directly into the path of Aleu Badra Faye, but the big striker couldn’t keep his shot down from four yards out to give Bonnyrigg a massive let off.

A double change saw Ross Gray and João Balde, starting his first game for the Rose, make way for George Hunter and debutant Leo Watson, who signed on loan from Hearts earlier in the day.

It was almost an instant impact from Hunter as the striker prodded the ball into the back of the net from a Currie free kick, but the linesman put his flag up to deny Rose the opening goal.

As if so often the case though, Hunter had no plans of letting lost chances affect his game, as last season’s top scorer put Bonnyrigg ahead with just twelve minutes to go.

Strollers elected to play the ball short from the goal kick, allowing McGachie to put both defender and goalkeeper under immense pressure, which resulted in the ball falling at the feet of Hunter, who made no mistake in emphatically curling the ball into the far right corner.

Strollers tried to find a way back into the game from set pieces situations, but never really troubled Mark Weir in the Bonnyrigg goal.

With the side knowing how important it was to pick up the win, there was a noticeable sigh of relief around New Dundas Park as McGachie rounded the game off in injury time.

The goal also came from good pressure, this time from Hunter as he hounded Jack Brydon at the back and pinched the ball off him. Hunter then charged towards goal, but had the wherewithal to square it to his strike partner McHachie, who tapped home for his first goal of the season.

Strollers’ Christopher McKee picked up a red card in the aftermath of the goal, but the referee blew the final whistle moments later to confirm that Rose were back in the win column again.

Robbie Horn's side travel to Ainslie Park on Saturday to take on a Spartans side that picked up a 6-0 win over Vale of Leithen on Tuesday night.